SCF4-SDK comes with open-sourced command line and GUI sample programs for rapid controller evaluation. A simple control software example is provided for testing and demonstration. Software is given "as is" to help with getting started and testing.

Source code is maintained on GitHub

There are several control software branches maintained in parallel for different cameras. See table below for details

Python program with a graphical user interface allows many parameters to be controlled by an inexperienced user. To keep user interface uncluttered some parameters are not displayed. After connecting to SCF4 controller virtual serial port version string should be displayed at the bottom. Also, all controls will be activated. From now relative movement commands should be issued to check if connected motors turn properly (once button is pressed it will change positioning mode to absolute). When sliders operated positioning is switched to absolute mode, it makes sense after the axis is referenced.

Python scripting language with PyQt5 user interface was chosen because of rapid development and clear syntax. Python 3.6 and a few dependencies should be installed before running any examples. Python and PyQt5 enables modern cross-platform user interface capable of running on high DPI monitors correctly. 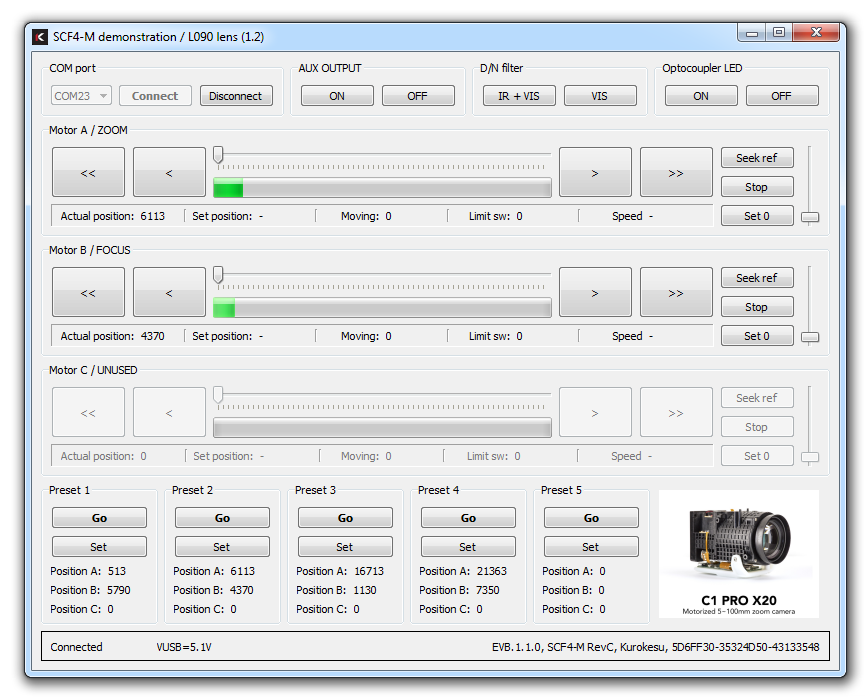 Many lenses and motion systems can be connected to the controller and they can be split into two groups - with and without limit/reference switch/sensor. So there are two fundamentally different homing approaches.

Program configuration is saved to settings.json. It's a read/write file with the purpose to provide default settings for some parameters like motion speed, jog steps, last used COM port, etc. and save settings and last position when program is closed.

Internal stepper motor driver has 16-bit position counter, absolute positioning is possible within a range of 0..65535 steps, (for 200 steps per revolution motor equals 20 full turns). In relative movement, if motion exceeds 16bit counter range it will overflow and continue the motion. The single move command is also 16 bits.

Control commands also can be sent directly from a terminal program of your choice. Baudrate for virtual COM port is irrelevant and communication speed over Full-speed USB 2.0 is 12 Mbit/s.

Export
Back to top